One of the Christian Moerlein sales reps offered me samples of a few of their beers that have gone under recent recipe changes. I then decided to take these reviews as an opportunity to try and tell the story of Moerlein and help everyone know the company a little better. To tell the whole story I’ve split it up over three posts, 1 for each beer and each period of Moerlein’s history.

The original Christian Moerlein Brewing Company was founded by a Bavarian named Christian Moerlein. Christian was born in 1814 and learned blacksmithing and brewing in Bavaria then immigrated to the United States in 1841 and eventually settled in Over-The-Rhine and started his brewery. The company went on to become the biggest brewery in Cincinnati at the time as well as one of the top 5 in the entire country.

Christian died in 1897 and his company was not long to follow suit due to prohibition. Like many breweries in Cincinnati and across the country Christian Moerlein Brewing Company was unable to continue on and the brewery and brand died with the birth of prohibition. Luckily for us that was not the end of this brands story.

One of the beers brewed by Christian Moerlein (the guy) was his Barbarossa. This recipe has been tweaked since his time but the brand and idea remain the same. Here is what the current Moerlein company has to say on this beer:

The Barbarossa is slow-aged with a reddish-brown color and a malt aroma derived from Munich dark malt. Named in honor of Frederick I, emperor of Germany, known as Barbarossa. 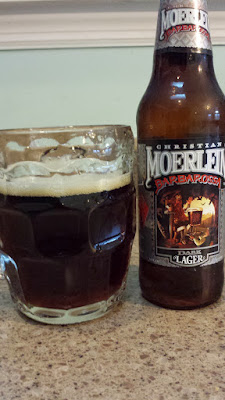 Started with a nicely thick light brown head that dropped down to a ring fairly quickly. Very dark brown with hints of garnet when held up to the light.

Mild aroma mainly featuring molasses but along with some nuttiness, hints of caramel, and dark fruit from the malts combined with a very light earthiness from the noble hops.

Low levels of clean earthy bitterness pale in comparison to the strong presence of caramel, molasses, plums, and other goodies from the malts.

Medium light body with light carbonation and smooth creaminess and a clean finish.

This isn’t the most exciting beer out there but it is a delicious and traditional example of a great beer. Is this every going to be my go-to Moerlein beer? No, but it is a nice dark lager to satisfy your need between Bockfest and Oktoberfest.

Follow us on Twitter or Facebook to get notified when the next post in this series goes up and we learn about how Christian Moerlein came back into existence and get my thoughts on the OTR Ale.