One of the Christian Moerlein sales reps offered me samples of a few of their beers that have gone under recent recipe changes. I then decided to take these reviews as an opportunity to try to tell the story of Moerlein and help everyone know the company a little better. To tell the whole story I’ve split it up over three posts, 1 for each beer and each period of Moerlein’s history.

When we last left the Christian Moerlein company they had closed down due to prohibition. With the return of legal drinking in America the company did not return. Other Cincinnati breweries including Hudepohl, however, did. By 1981 Hudepohl had bought the rights to the Moerlein name and released the Christian Moerlein Select Lager.

This was exciting both for the return of a Cincinnati brand but also because it was the first American brewed beer to fully confirm to the reinheitsgebot. The reinheitsgebot is a 1518 Bavarian purity law limiting beer ingredients to water, hops, and malt. Yeast was not included since it had not yet been discovered, you can go learn more on the reinheitsbegot at my post from last year.

That remained the state of Christian Moerlein for almost 20 years, we’ll hit the next stage in its history later this week. For now, onto the OTR Ale! 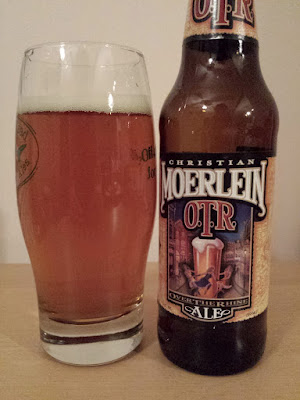 Complex aroma with bready toasted biscuit malts matching pine and citrus hops that have a light touch of earth. The aroma is complex, but it’s not heavy or profound, all those flavors I got took a bit of digging and concentration to pull out.

Deep amber color with golden hues and a light skim of off white head. That head started a tad thicker but dropped down to a thin layer though it did leave a nice lacing.

Heavy toasted biscuit flavors as soon as it meets your tongue. This gets followed by, and skillfully blends with, hop flavors of earth, pine, and citrus. Those hops back a medium light dose of bitterness which follows a pleasant wave of sweetness. I’m impressed by the delicate balance that this beer is able to pull off. Far too many American Pale Ales and India Pale Ales don’t balance nearly this well. Also the presence of that earth tone is an enjoyable diversion from the citrus/pine domination of so many pale ales.

The body is just short of having a medium heft to it but does have plenty of carbonation to go around.

Enjoyable thanks to the excellent balance and varying flavors and aromas but not a stand out in its category, due mostly to the tremendous number of beers being brewed in this style.

Check back on Friday for my thoughts on the recently reformulated Northern Liberties IPA as well as the recent, and current, state of Christian Moerlein Brewing Company.

2 thoughts on “Beer Review: Moerlein OTR Ale and the rebirth of a brand”