One of the Christian Moerlein sales reps offered me samples of a few of their beers that have gone under recent recipe changes. I then decided to take these reviews as an opportunity to try to tell the story of Moerlein and help everyone know the company a little better. To tell the whole story I’ve split it up over three posts, 1 for each beer and each period of Moerlein’s history.

Despite all that Cincinnati soul the liquid in the bottle was not from Cincinnati, or even Ohio. It was being contract brewed out of a brewery in Pennsylvania. Contract brewing is not a dirty word like some think. It’s how Sam Adams got started and how Quaff Bros continues to exist! It was, at the time, the only option available to Moerlein and they always had the goal of bringing everything back to Cincinnati.

That goal was partly achieved in 2011 when Moerlein began making an extremely limited amount of beer in Over-The-Rhine, in fact it was just 1 beer., Arnold’s 1861 Porter (only available at Arnold’s). More steps were taken with the opening of the Moerlein Lager House on the banks (if you go get the pretzels!) but any beer bought in a bottle at Kroger was still from out-of-state.

Finally Greg Hardman’s dream was realized in the spring of 2013 with the opening of a full-scale 15,000 barrel plant in the historic Kauffman Brewery in Over-The-Rhine. As of today all Moerlein beer, bottle or draft, is brewed in Cincinnati. But there was still 1 big change, a head brewer. Richard Dubé was the head brewer at The Lager House from the day it opened and began to tweak the Moerlein recipes that were served there. With the opening of the production brewery in OTR he became the Vice President of Brewing Operations and those recipe changes got put into bottles of Christian Moerlein all across the tri-state area. That’s the Moerlein story up until now, where it goes from here time will tell but until then let’s drink beer!

Now I’ll openly admit that I disliked Moerlein beers, they didn’t taste good and weren’t “Cincinnati beers” to me since they were made out of state. I specifically did not like Northern Liberties. It just wasn’t that good, especially compared to the amazing work being done with IPAs across the country. Luckily Richard’s recipe changes have made a world of difference and when we did the King of the Cincinnati IPA competition Northern Liberties came in at the top spot of the 3 packaged IPAs we sampled (Mt. Carmel IPA and MadTree Psychopathy being the other two). Here’s what Moerlein says about this brew:

You’ve made a discovery–a well-hopped IPA inspired by the revolutionaries of Cincinnati’s Northern Liberties. North of Liberty St. and beyond the reach of municipal law, the area was known for tolerance of beliefs and behaviors, which were shunned in Cincinnati proper prior to 1849. Moerlein Northern Liberties draws inspiration from these free-spirits with this hoppy, well-balanced, copper IPA in pursuit of Life, Liberty, and Hoppiness. 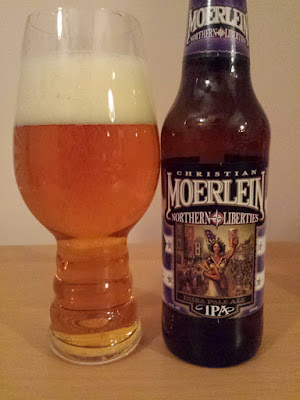 Citrus and fruits dominate the nose with a touch of biscuit malts but it’s all somewhat light and subdued.

Killer flavor with outstanding bitterness. The aroma was subtle but this flavor is aggressive. Those fruits from the nose develops into plenty of tasty citrus flavors. Malt is still full of tasty fresh biscuit goodness.

Body is medium light, smooth, and super crisp with butt loads of carbonation.

If you had this beer before 2012 you owe it to yourself to try it again. We can all thank Richard Dube for making this a kick ass beer. Here’s what he changed to the recipe: