Ohio has been lucky to receive lots of love from breweries deciding to expand distribution to us in the past few months. Dechutes is continuing that trend and launching state-wide and in Northern Kentucky next week.  To hype their arrival they’re having a plethora of events (see the list below) and were also kind enough to hook me up with samples, which we’ll get to in a bit.

I’d heard of Deschutes before due to their Abyss stout and Black Butte XX## Imperial Porters (they’ve made a few of them all roman numerals) thanks to online hype and beer traders. I was lucky enough to try Abyss at a recent bottle share and, though already thoroughly buzzed I found it a tasty and impressive stout.

According to the info Deschutes sent me their Black Butte porter (neither numbered nor imperial) is the #1 best-selling craft porter in the country. Pretty impressive stat, though I think that is likely due to Deschutes size and distribution range. Speaking of distribution range, we’re their 23rd state, plus 2 Canadian provinces, and D.C. For size they were the 5th biggest craft brewery in 2012. Anyway, onto the beer…

With a dark beer as our first and flagship brand, Black Butte defined Deschutes as a radical player. A slight hop bitterness up front enhances the distinctive chocolate and roasted finish. It’s prized for its creamy mouthfeel and intense complex flavors. 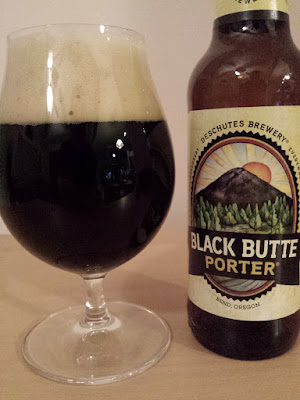 Thick and creamy tan head leaving a lacing as it slides down the glass.Impressively black color akin to tar.

Malty aroma of roast, chocolate, and coffee without any hop action.

Very chocolate forward flavor with some roastiness. Hints of coffee and a splash of caramel malts. Subtle presence of hop bitterness doesn’t do much to balance the malts but it’s a porter so balance isn’t important.

Bountifully creamy mouthfeel that is the most noticeable, and enjoyable, aspect of this beer. Body feels light and somewhat watery, should/could be thicker.

This is a tasty beer with nice chocolate aroma and flavors but I’m not overwhelmed. Hopefully with Deschutes size this beer will end up in a few bars most of which lack any porter options and the only dark beer is a Guinness. I want to do a blind tasting of this and Edmund Fitzgerald sometime.

The citrus punch of a big IPA, minus the one-dimensional hop sledgehammer. Seven select European and domestic malts round out the edges for a complex, copper-colored brew. Like its namesake ski lift, it’s an insider’s ride to fresh thrills. 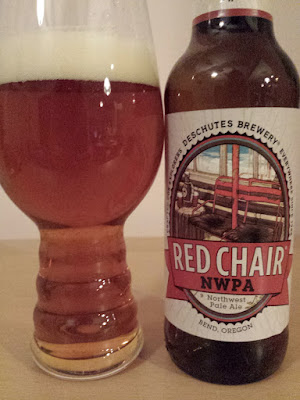 Color of a dirty penny but a solid quarter-inch of off-white head.

Carmel malt greets the nose with a mix of biscuit and a solid dose of pine hops.

Aroma was more caramel then biscuit but the tongue gets much more biscuit then caramel, though they’re both still present.

Not a tremendous amount of hop flavor but the sweetness from the malts is nicely balanced by hop bitterness.

Body falls on the light side of medium with a smooth creaminess and bountiful carbonation.

Don’t recall ever hearing of a “Northwest Pale Ale” before but this reminds me of a light Imperial Red Ale/Red IPA kinda thing… so a Red Pale Ale. Personally I enjoyed it much more than Black Butte put not as much as Blank Slate’s Fork In The Road.

If either of these reviews has enticed you to try them or other Dechutes beers then check out the extensive list of events they have going on next weekend.

FULL DISCLOSURE: I reached out to Deschutes when I first heard rumor of them coming to Ohio. They were kind enough to send me both of these bottles to review for free. They also sent a bottle of their Mirror Pond Pale Ale but it was killed by the Polar Vortex. To our readers, and any breweries interested in sending me samples, giving me free beer does not guarantee you a favorable review, though I do promise to review your product and publish a post on it.