Rhinegeist has made impressive beer in OTR for a few months now and has gone through a variety of beers and styles but Truth was one of their launch beers and has remained part of the core lineup. When they announced they were canning this beer was clearly going to be one of the first to be distributed. Now you can find 6-packs of 12 oz. cans of Turth and Cougar across the greater Cincinnati area. Stores are selling out within a day or two after getting it so follow your favorite store like @Lovelandcappys to know as soon as it comes in. Here’s the brief blurb that Rhinegeist has for this beer:

Intensely hopped, dry IPA with Centennial, Citra, Amarillo and Simcoe hops. We hop this at a rate of 3lbs/bbl to rev up peach, mango, and passionfruit notes. 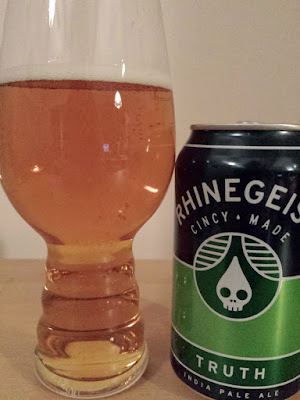 Style: IPA
ABV: 7.2%
IBUs: 75
Calories: 200
Malts: 2 row, Cara Red, Rye Vienna
Hops: Amarillo, Citra, Simcoe, Centennial
Light aroma of lighty toasted malt blends with a fair dose of pine and citrus hops.
Outstandingly clear golden orange color that was topped with a light bit of creamy off-white head. That head skimmed down fast to leave a ring around the edge of the glass.
Biscuity malts on the tongue mix with an abundance of pine and a lighter touch of citrus then expected based on the aroma.
Medium body with a very dry finish and some lingering bitterness. Not as much carbonation as expected or should be present for style.
Not a bad IPA by any means but far from outstanding. Also I’m well aware this can is not representative of this beer as a whole. The times I’ve had it on draft have all been much more impressive than this. I’m guessing they have some carbonation problems in their canning line or possibly not getting proper fills, however the other cans from this same 6-pack were better carbed. Just something to be ware of for a bit until they get their canning line perfectly dialed in. There was also more pine flavor then I remember having before or personally care for myself, but if you love piney hops then you gotta get some of this.