Yesterday Jackie O’s Pub & Brewery had one of their bottle releases and I finally made the trip over to Athens to check it out. Luckily I was also able to talk to head brewer Brad Clark for a few minutes about the process. First a bit about Jackie O’s. There was originally a small brewpub in Athens named O’Hooley’s that went under and was resurrected as Jackie O’s in 2005. For the past 8 years they’ve been serving the students of OU fantastic draft beers and for the past 5 they’ve been doing these bottle releases 3 to 4 times a year. 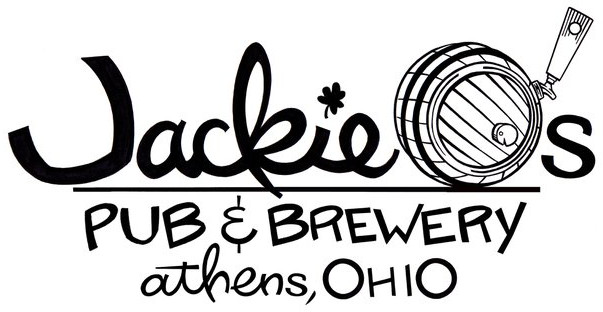 Starting last August new cans of their beer started to appear across Ohio. Mystic Mama, Firefly, Chomolungma, and Hop Ryot (just released last week) are all delicious beers and will soon be joined by cans of Razz Wheat. However these beers only represent the tip of the iceberg of awesome that is Jackie O’s beer.

The next level of that iceberg can sometimes be found on draft around Cincinnati but is mainly only available on draft at Jackie O’s brew pub and public house (a restaurant right next to the brew pub). These bottle releases reveal a large chunk of their awesomeness with amazing sours and astounding barrel aging.

Step right up and take a page

The flow of the bottle releases is generally as follows: Starting at 5 pm Friday night you show up at the public house and receive a one-a-day calendar page from head brewer Brad Clark. Shocking as that bit may sound to some when I talked to Brad he said it was important to him and a big part of his enjoyment of these events. He likes getting to meet and spend some time, even if it’s all of 2 seconds, interacting with the folks traveling from near or far to enjoy his beers. The other thing that shocked me is that they’ve never had to use more than 1 calendar. That’s right, no more than 331 (the calendar pages have Saturday and Sunday on the same page hence the lower number) have ever showed up for these events. In a world where Hunaphu Day sells 3,500 tickets in a matter of minutes it surprised me to know so few show up to Jackie O’s despite how sought after their bottles can be in online trading.

Once you have your calendar page the evening is yours but few people go far. Perhaps the best reason to go is not the bottles but the awesome draft list which include special beers only available on Friday night.

After you’ve enjoyed enough of the draft list you can stumble into one of the many bottle shares going on around Athens. Many times there are large bottle shares planned well in advance but sometimes they are thrown together in the spur of the moment. These shares are known to have some extremely rare and exciting beers pop up at them.

Step Right Up and Buy Some Beer!

The Public House opens up Saturday morning at 9 for more beer and plenty of food to help you sober up from the night before. Not too much exciting stuff occurs here till 11 rolls around. This is when the real bottle release starts. Brad Clark climbs up on stage and announces what beers are available (which is also posted online in advance) and what the allocations are going to be.

Depending on how tight those allocations are your day in the calendar becomes important. The first person to meet Brad Friday night received January 1st and becomes the first in line Saturday morning getting the pick of the litter. January 1st gives Brad his order, pays for the beers. Then wash, rinse, and repeat throughout the year. Brad and the team usually takes a quick break before second sales begin.

Whatever bottles survived the first round go back through the calendar so your calendar page is now extremely important. For example if you had early February yesterday you got 2 more bottles of Dynamo Hum. If you had early March, like myself, you got no more Dynamo Hum but more Cellar Cuvee 8, Evelyn, and Imixence.

Even as the second sales were going on things were winding down quickly. Many folks didn’t stay around for second sales at all, knowing they were too late in the year to get more of the bottle they wanted. After the sale was officially done the public house returned to business as usual with many lingering folks, like myself, getting growler fills.

If this sounds like a fun time to you (which it should, or I’ve done a poor job of describing it) then like Jackie O’s Facebook Page and wait 2 or 3 months for details of the next release to be posted!