Stone’s got a new year round beer hitting the market this week to cash in on the session IPA craze. Go To IPA doesn’t just cash in on the session IPA craze but also the hop bursting craze that’s been sweeping through the nation of homebrewers. Stone has never seemed like the company to cash in on any craze, much less one driven by market analysis. Remember, this is the company through brought us Arrogant Bastard and made it live up to that name.

All these things left me in a situation of not anticipating this beer. When companies make these kinds of changes it makes me worry that the quality of their products is going to begin to suffer. Sometimes though we have to forget the marketing and just enjoy what’s in the bottle. Before we get to the quality of the contents here is Stone’s blurb on the brew:

Since Day One, we’ve been abundantly forthright and fully transparent about our lust for hops. It’s led us to craft many an IPA, most of them imperial—some intense for their time and all timeless in their intensity. For Stone Go To IPA, we are embracing our hop obsession in a new way, funneling an abundance of lupulin-borne bitterness into a “session” IPA delivering all the fruity, piney character of a much bigger IPA. To accomplish this, we employed “hop bursting,” a new technique wherein an irrational amount of hops is added during the final phase of the brewing process to coax out extreme flavors and aromas while also imparting a burst of desirably pleasant bitterness. The result is an Alpha-acid-rich beer that fans can enjoy more of without missing out on the assertive hop character you, like us, crave. So, sit back and go two with your new everyday go-to IPA and bask along with us in the glory of the almighty hop. 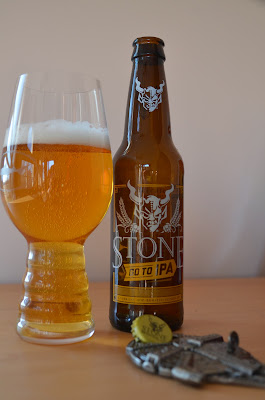 Deep powerful aroma with hints of many fruits like grapefruit, mango, orange, clementine. Some earthy hops and a few touches of pine blend in with all the tropical fruit. A light malt body backs all this hop flavor.

It’s just beautiful. This looks like a fake beer, it’s too good-looking, too perfect. Creamy white head starts out around two fingers thick and drops to a hefty skim. That skim layer stays around all the way down leaving lacing in its wake. The color is a rich golden light brown with astounding clarity.

The instant it gets in my mouth I get a taste of oranges. From oranges we move on to light mango but then we move to pine. There is plenty of bitterness to go around here. It’s not going to crush your palate like some IPAs but it’s plenty enough to remind you this is a Stone beer. Malt wise there is the slightest touch of bread and caramel.

Medium body and bountiful carbonation make for a good, but unexciting, mouth feel.

I still wonder about what prompted this beer. Did a brewer at stone suddenly happen to have a fantastic idea for a session IPA or did some market analyst approach the brewers and tell them this was their next beer? Either way we win with a delicious and highly sessionable beer. I will likely be buying more of this.

DISCLOSURE: This beer was sent to me for free by Stone. To our readers, and any companies interested in sending me stuff, giving me free stuff impacts the review in only 2 ways. That I WILL review it and that I WILL write a blog post about it. Giving me free stuff does not guarantee you a favorable review.