If you never lived in Dayton you may not know that Milano’s Atlantic City Subs is a small chain of 3 stores in that area. Recently they have opened their newest location closer to us in West Chester.

I had heard about the chain from some folks I know in Dayton who mentioned the good beer and tasty pizza. Milano’s grew to more notable fame in my mind for landing the first tap handles in the area of Fat Head’s new Hop JuJu. Hop JuJu is FatHead’s impressive Imperial IPA that won gold at last year’s GABF.

I never got up to the restaurants to try Hop JuJu but did finally get their last night and strongly regret not doing so sooner!

I don’t know where I’d gotten my expectations from but the reality was much different then the expectation. For some reason I though Milano’s was a smaller deli style place with an amazing tap or two. It’s definitely far from a small deli and more in line with a sports bar. Rough guess of 20+ TVs showing too much basketball for my taste, but tis the season, luckily there was hockey as well.

Food wise Milano’s is heavy on subs though that is what they’re famous for after all. Subs can be cold, grilled, or baked, options I like depending on the weather. I personally don’t want a cold sub in January or a hot sub in July. The flip side of the menu features pizza (which they’re also famous for) and a bit of other bar fare.

We decided to split an appetizer of queso con chili, which was standard queso dip with a large spoonful of chili in the middle. Served with standard tortilla chips it tasted great and the chili added a nice change to queso. My mom and I split a veggie pizza that was pretty standard but tasted great, I’d have preferred deep dish but c’est la vie outside of Chicago. My dad thoroughly enjoyed his grilled Italian sub. 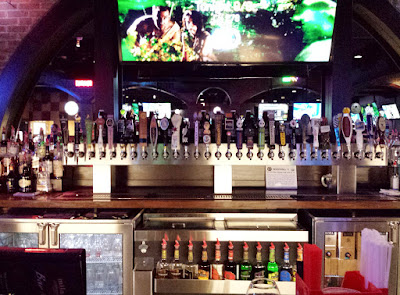 But this is a blog about what to drink and this is where Milano’s truly shines. Just look at all those taps!!

You can’t make them out but rest assured there is plenty of good beer to keep you happy for days. I went with Jackie O’s Waka Waka Waka to satisfy a combined love of Jackie O’s, flavorful IPAs, and Fozzie. It is packed with tropical fruit flavors backed by a nice malt bill and lower than normal IPA bitterness. I was going to follow that up with a Great Lakes Blackout Stout but had to get home to watch Cosmos.

I was a tad disappointed when discussing where to go that they don’t list what’s on tap online anywhere. Yes, their Facebook page shows recently tapped beers but that doesn’t help too much when you have so many taps. It’d be great if you could get a full up-to-date tap list from either Facebook or their webpage.

If you’re in the Mason/West Chester/Monroe area and are looking for a sports bar with good food and great beer then Milano’s definitely takes the cake. I’m looking forward to watching more hockey there and can’t wait for football season to start.