The intention of this blog was to always discuss all kinds of local alcohol. Being a beer guy myself this has been most of my focus while Ginny has covered wine, liquor, and beer. I made it my goal of 2014 to learn as much as I could about wine. As of January 1st, 2014 I knew extremely little. I can safely say that I now know a slight bit more. I’ve read two books on the subject and am trying to finish a 3rd but keep getting distracted.

It was into this situation that I received an email from Oliver Winery about their new series of wines and wanting to send me samples. I know well that you can’t learn about alcohol without drinking it and trying as many styles as possible so I happily accepted their offer, which included an interview with Oliver Winery president Bill Oliver. Continue on after the jump to learn more about Oliver Winery and their new Vine series.

Let’s start with the press release about the new series:

Oliver Winery, Indiana’s oldest and largest winery, has launched a new line of wines produced from fruit grown at premium California vineyards. The trio of wines combines premium California grapes, from select growers, with proven Midwest craftsmanship. “The cornerstone of our Vine Series is our relationships with talented growers on the west coast,” said Oliver Winery President Bill Oliver.

Oliver Winery’s Vine Series offers a Chardonnay, Moscato and Dry Red Blend. The character of these wines reflects Oliver Winery’s philosophy that great wines express the quality of exceptional grapes. All three of these wines are fruit forward, with an emphasis on balance and varietal character. “Moscato has been very successful for us,” said Oliver. “We have not offered a California-sourced Chardonnay and putting one in our portfolio made perfect sense as a partner for Moscato.” Bill continued that dry red blends have gained popularity, which was the rationale behind rounding out the trio.

“Our experience with reds from California fruit made that a natural direction for us.  We are confident wine drinkers will find all three of these wines offer outstanding quality at this price,” he said. Oliver Winery chose California designer Auston Design Group to create the new packaging. Auston Design has created labels for numerous well-known brands including Sierra Nevada Beer and Bogle Wine.

The new wines are available now at retailers for less than $15 per bottle.

Oliver Winery started over in Bloomington, Indiana in 1972 by Bill’s dad William Oliver. Bill came on board at the winery fresh out of college in 1983 taking over for his dad. Bill immediately began to focus on retail and then started buying fruit from the west coast. The first time Oliver brought in Californian fruit was back in 1985. Bill relayed that “It’s not as easy as it might look to get good fruit from out there. It’s a tight a community and there are good growers or bad growers, good spots and bad spots.”  Oliver’s history with the growers isn’t just placing an order and buying grapes. It’s been an evolution of cultivating relationships, networking, making wine, and sending wine back. This has shown the California growers that their grapes aren’t going to waste. Leading to the past 10 years where there has been a stable set of grower relationships that Oliver can believe in and that believe in Oliver in turn. The vine series grew out of those relationships.

Before I decided to start getting into wine we spent a weekend in Bloomington with our friends and visited Oliver. The winery and vineyard is a beautiful area to sit out on a nice day by their lake and try some wines. Also for the beer lovers Oliver is only about 20 minutes from Upland Brewery which is where we headed after visiting Oliver.

Let’s talk about these wines a bit and I’ll share my, very inexperienced, thoughts on them.

According to Drink This: Wine Made Simple Chardonnay is a white wine whose grapes can be grown just about anywhere and processed in many ways. It’s become the world’s most popular white wine grape. The ability to grow anywhere leads it to ranging from tropical and sweet to acidic and steely. The flexibility in processing swings from toasty oak flavors to buttery cream.

The Chard from the Oliver Vine series pours pale yellow color with an abundant aroma of apples, nectar, a touch of honey. Flavor has a noticeable taste of butter to it, I know this is a really bad sign in beer but my understanding is that butter flavors in Chardonnay are acceptable. It’s got a lasting smooth finish leaving a creamy slick feeling behind on your tongue. This being the 4th wine I’ve had I can say that I like it and would have it again. 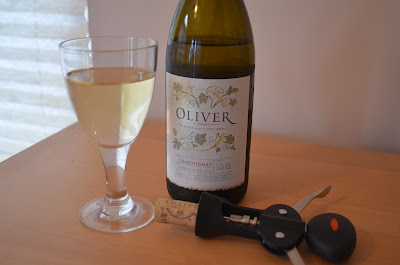 According to Bill Oliver dry red blends have always been around from a European/French origin. They’ve never been fond of labeling wine by variety like we are. Instead of Riesling it’s been by region like Burgundy or Bordeaux. A decade ago in Cali was an appreciation of blending with Bordeaux style blends. This turned into a lot of creative blending. Cab Sav & Shiraz work together, the fruit and luxuriousness of Shiraz with the tannin/aromatic structure of Cab Sav is what our red blend is based upon.

It’s got an attractive deep red color with viscous legs running down the side a few millimeters apart. Aroma gives hints of alcohol and berry but not much of either. Flavor packs some mild berry action. Dry finish with a touch of tannin (though I’m still learning what those are). Very mild wine that doesn’t have too much going on anywhere. It’s not going to blow anyone away but also won’t offend anyone. This would pair well with a meal and not compete with it. 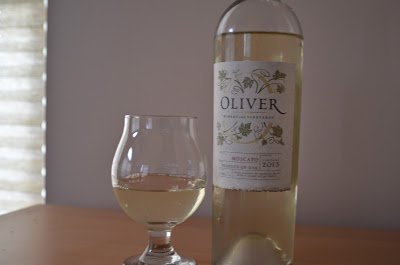 Moscato was an Italian thing for a long time. These are sweeter wines, not cloying so. US has jumped on it recently, about 6 years ago. come from Muscat type grapes. Very aromatic, tropical fruit punch character. Exotic in their aroma and flavor with a high acidity. Requires 75% Muscat grapes, we make theirs with a bit of Frizzante to add bubbles and fizz making it more delicate and fresher tasting

This wine has an extremely pale yellow that is more like slightly yellowed water. Slightly fruity aroma with hints of apples, pears, maybe a touch of peach. Very sweet and wet with more apple and pear, maybe a bit of pepper as well.

Knowing little about wine I asked Bill to tell me about Moscato’s and this is what he had to say:

More on the Oliver Vine Series

According to Bill the grapes for the Vine series is shipped in from California in the form a juice, pre-crushed and pressed, for the white wines or pallet sized boxes of grapes in refrigerated semi-trucks. The co-coordinating of those trucks, and their 3-day travel time from California to here, being one of the biggest problems in creating the Vine series.

Within California itself the primary source is the Central Cost appellation, a giant stretch from San Francisco to Santa Barbra. Bill said that within the Central Cost area is Pasa Robles with some really nice fruit, a big chunk of the Moscato. Monterrey is a little further north which is where the Chardonnay grapes come from.

Oliver Wines are normally priced in the $18+ range, which I’m told is high for a grocery store. The vine series will be priced under $15 essentially opening the grocery store market for Oliver. They were able to get the price lowered by making them on a larger scale, not cutting quality so no concerns there. This means you’ll be seeing these 3 wines in Kroger in a week or two, if they’re not there already.

FULL DISCLOSURE: I was contacted by the PR company who was kind enough to connect me to Bill Oliver who sent the samples. To our readers, and any companies interested in sending me items, giving me free things impacts the review in only 2 ways. That I WILL review it and that and I WILL write a blog post about it. Giving me free stuff does not guarantee you a favorable review.