It is Sunday afternoon and I am slowly coming down from the food high that I have been riding since Friday evening. I think I can safely say that the first Cincinnati Food and Wine Classic was a solid success with plenty of room to grow in the future. The event took place Friday evening and all day Saturday in Washington Park, with a few surrounding restaurants playing host to various after parties. I was lucky enough to attend both days with a VIP media badge and here are some of the highlights.

It comes as no surprise that food took center stage at the Food and Wine Classic. The organizers did a great job of making sure that just about every local restaurant of note was present as well as several others from places like Louisville, Nashville and even Dallas. Friday night’s grand tasting was pleasantly filled but not crowded and it was easy to stroll comfortably and get a chance to try everything. During the day Saturday there were a selection of different demonstrations, tastings, and competitions that featured several food samples as well. Saturday’s grand tasting was very well attended and unfortunately food supplies did run a little short that night so if you came later in the evening you might not have had the chance to try everything. That was a shame but I was glad to see such a great turn out for a first year event. Everything I tried was both beautiful and delicious, even the heart and the headcheese. 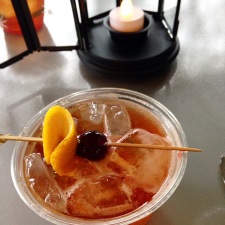 You know what makes for a really special VIP cocktail lounge? Having celebrity bartenders waiting on you and not having to pay extra for the drinks. Throw in a beautiful antique bar and lots of comfortable seating and frankly I was reluctant to leave and attend the rest of the show. Friday night Aaron Strasser from A Tavola and Molly Wellmann from everything were the talents behind the bar. Saturday Night Rom Wells from The Rookwood and Catherine Manabat from Metropole took over. When I wasn’t sipping custom cocktails from these wonderful people I was attending panels. I learned a lot about wine at the Wines of Rioja and very much enjoyed Catherine’s cocktail demo, Raise the Bar. Molly Wellmann moderated the Four Bourbons: Four Ways panel with the owners of Arnold’s, Wiseguy’s, and The Littlefield. I learned something new at each event but my favorite was the Sommelier Slam. Six local sommeliers did a blind tasting of five different wines. I was amazed at the amount of information they were able to get out of the wine in only five minutes.

Without a doubt the thing that made the Cincinnati Food and Wine classic so special was the amazing line of up talent that was involved and just how present all of the guests were for the entire weekend. How often in life would you get the chance to have Jean-Robert de Cavel walk you through how to make a sauce (or see him dancing with the crowd at the end of the night Saturday?) At the grand tastings you often had your sample handed to you by the chef who created it. I got to talk with Todd Kelly, Jose Salazar, Julie Francis, Michael Paley, and Cristian Pietoso at various points over the weekend, something I rarely get to do when I eat at their restaurants.

Overall it was an incredible weekend and I am very much looking forward to next year. The food and drink scene in Cincinnati has come so far in recent years, it is wonderful to have an event that celebrates all of that talent and hard work in one place.

One thought on “Cincinnati Food and Wine Classic Recap”