Folks living along 75 north of the 275 loop [footnote]aka Beyond the Wall [/footnote] will soon be able to visit a local brewery without having to venture towards Cincinnati. DogBerry Brewing Company is coming soon to fill a large need for ultra-local craft beer in West Chester, Ohio.

Others have already written a fair bit has already about Tony Meyer and Chris Fede’s new brewery and I’m hoping not to retread over too much ground; as such please check out my buddy Jesse Folk’s post for WCPO for more background info.

Their brewing setup is every homebrewer’s dream and is a glorified homebrew. For the scope and goals that DogBerry is after I think this is a fine setup. Don’t dwell on “glorified homebrew rig” too much or think that it means it will be inferior quality to something brewed on a bigger system. Some of the best beers I’ve ever had have been homebrews.

This small size also allows for incredible flexibility that few larger breweries are able to do. DogBerry could easily spend an afternoon making a 1 barrel batch to play with a tweak to a recipe, if it sucks it’s dumped without much loss, if it rocks it’s easy to bring back!

I actually know a homebrewer who has this same fermenter… just in the 6 gallon size not the 2 barrel size! Though I know many homebrewers who wish they had the 2 barrel size!! Again I emphasize that not every brewery needs a forest of 90 barrel stainless steel fermenters. 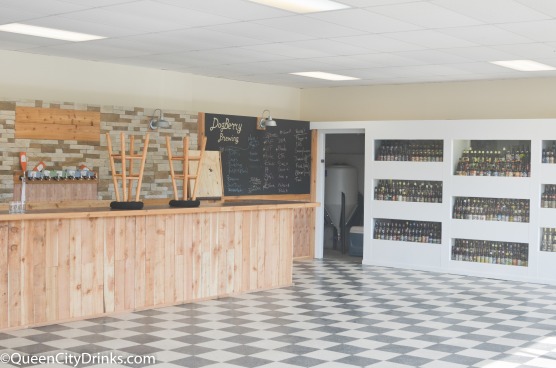 Also note the awesome bottle collection on those shelves, all unique and only about half of his collection. But instead of talking about everyone else’s beer that they’ve drunk let’s talk about DogBerry’s beer.

The next two pictures show their chalkboard tap list. The yellow YR marks their year round beers, other than that everything listed here is in flux. Yes it says sours and barrel age but those are more long-term prospects then immediate realities so simmer down.

Their focus is solely on their tap-room and a few bars and restaurants around West Chester [footnote] Dingle House, Mellow Mushroom, Milano’s, and Putters were all mentioned as likely spots [/footnote]. The tap handles are simple but I think that simplicity, with the bold colors, will stand out in a lineup of the crazy tap handles other breweries use [footnote] thinking specifically of MadTree’s branches [/footnote]. Also note hanging from the tap handle are two medals they’ve won in homebrew competitions.

While talking to the duo I sampled 3 of their homebrews that they brewed on their keggle rig before they got the new 1 bbl. system setup. I’m not going to go in-depth on them because they may differ from what is released in the tap-room.  I’m bringing this up to give everyone a general idea of the kind of style and quality we can expect.

Rest assured that all 3 were tasty beers that had subtle twists on classic styles. Their beer is good and I want to drink more of it which is all I need to know for now. As a tidbit to any homebrewers out there who care about recipe formulation, they love Marris Otter malt and use some of it whenever they can. Many readers may not know what that means, but it means good things!

But When Can I Drink It!?

The goal is to open the doors later this month but things are in flux so there is currently no grand opening date set. If you’re anxious for them to open then follow them on Facebook and Twitter, they’re doing a great job of keeping things updated there. I’m 10 minutes from these guys and have great hopes of spending a lot of time here so I’ll be sure to keep you updated on their developments.

One thing to note is that they’re planning somewhat restricted hours that are still being worked out. The hours will focus around afternoon to early evening, like 3- 8 pm type of range. These guys repeatedly stressed the importance of family to them, both their family and yours. This is why part of the space will be used for a kids play area with chalkboard paint on the walls.

That’s all I’ve got for now but I expect good things to come from DogBerry. With their close proximity to my, and many of my friends, houses I have a feeling we’ll become permanent fixtures there.