The four main ingredients in beer are water, barley, hops, and yeast. Those four things have allowed for the creation of a plethora of flavors. However, some people wanted different flavors or textures. Other folks had different crops available to them. Both of these things changed what they used in the beer. These changes are what led to the use of adjuncts in beer.

Simply put an adjunct is anything other than barley that contributes starch to the beer. More simply? Anything adding sugar that will get fermented by the yeast. The most common are corn, rice, wheat, oat, and rye. To find the dividing line of what is an adjunct we have to go back to 1516 when the Reinheitsgebot defined beer as water, hops, and barley. You can read one of my first posts to learn more about the Reinheitsgebot, but for now all you need to know is it set the precedent for what is, and is not, an adjunct. Let’s take a closer look at the big five.

END_OF_DOCUMENT_TOKEN_TO_BE_REPLACED

Last year Budweiser started a new venture to get more people to drink Budweiser and expand their brand. This adventure was called Project 12. The idea is simple and cool. All the head brewers from all the Budweiser plants get to make a beer however they want… as long as they use the same yeast. This is very important and will be discussed more later. The yeast they were given is the same yeast they always use for all their beers, “the signature yeast first used by Adolphus Busch in 1876, creating brews that show Budweiser’s clean and crisp flavor.”

You may not have heard of Project 12 before but what you did hear about, unless you missed Super Bowl XLVI, is Budweiser Black Crown. Black Crown won the Project 12 competition last year and got released as a major nationwide roll out featuring far too many confusing commercials during last years Super Bowl. So it’s a pretty exciting honor for these head brewers and I’m not sure but I hope that whoever wins get’s a nice fat bonus at the end of the year.

END_OF_DOCUMENT_TOKEN_TO_BE_REPLACED 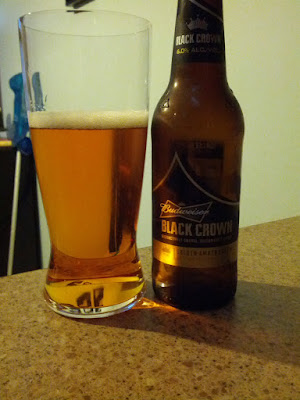 Here comes the second of the four beers that OB hooked us up with. This is a pilsner, something I don’t think has every been reviewed on this blog before. They’ve gotten a bad rap in the past 15 or so years by us craft beer geeks. Some big brewers decided to brew the living crap out of this beer and to do so in the most cost effective way possible. That has turned out great for their bottom line, but less great for our taste buds. But that’s their fault (and our fault for buying it) it’s not the fault of the style of beer. This is a great, complex, and classic style of beer. One that I’m happy to give some more attention to here.