We have some big brewing news coming out of Cellar Dweller today.

Head Brewer Steve Shaw announced this morning that he is leaving Cellar Dweller and will join the new Wiedemann Brewing project in St. Bernard.

Here is his initial release, we have some Q&A with him after the jump:

END_OF_DOCUMENT_TOKEN_TO_BE_REPLACED

Quaff Bros. is a gypsy beer label from Cincinnati, and now across Ohio, Kentucky, and Indiana. It’s been three years since my post helping you know your local brewery. There have been some changes at Quaff Bros that we’re going to get into, but rest assured, the future is bright and blue (melvin)!

END_OF_DOCUMENT_TOKEN_TO_BE_REPLACED

3-years ago Bryan Roth from This Is Why I’m Drunk reached out to local bloggers across the country to each build a 6-pack that represents their state. You can read that list here. About a year before that post I wrote another article on the Cincinnati Six-Pack.

Both of those lists are now hilariously out of date. The best example of this is that Rhinegeist isn’t on either list as they weren’t open yet. I initially sat down to write an update for Ohio’s part in the Six-Pack Project but remembered the difficulty in narrowing an entire state down into six beers. So, I decided to settle down to just a Cincinnati Six-pack, plus a few from Dayton. I also reached out to Pat at Pat’s Pints in Columbus and Rick Armon at The Ohio Beer Blog in Akron/Cleveland. They’ll both be doing similar posts covering their parts of Ohio in the next few weeks.

END_OF_DOCUMENT_TOKEN_TO_BE_REPLACED

With the winter holidays upon us and the new year drawing near I’m taking a moment to think about what I’d like to see develop for Cincinnati next year. WCPO’s Jesse Folk hatched this idea to “pick an aspect of the industry or scene that we’d most like to see or change in Cincy.” I’m pretty satisfied with the brewers, bars, and beer stores in the area, so I decided to think out of the box a bit to other fermented products.

END_OF_DOCUMENT_TOKEN_TO_BE_REPLACED

I have a voracious appetite for new music, nearly as aggressive as my quest for new beers. This has only gotten worse with Spotify and the ability to stream 17+ million some songs at the click of a mouse. One day I tweeted a few of the brewers looking for musical suggestions. Steve Shaw at Cellar Dweller was quick to respond with Larry and his Flask, which I now listen to daily.

That got me thinking what other brewers, and bloggers, like for music to brew by or keg/clean/bottle to? With Saturday being Learn to Homebrew Day what better time to build a playlist of tracks to listen to while teaching a friend to brew?

When I asked Steve Shaw again for writing this post he listed Hank The Third, Johnny Cash, and Steve Earle. Mentioning that Johnny Cash’s song Hey Porter is the song that named they named their Porter, “Hey Porter”, after. So here’s that to listen to

Matt Rowe said they’re mostly classic rock. He gets a little doo wop fifties and sixties music mixed in there as well. Another favorite is bluegrass, especially The Tillers and The Rumpke Mountain Boys. Perhaps most importantly from MadTree is their Do Not Play List

Leave it to Blank Slate to have an eclectic love of music.  While breaking the bounds of beer styles and defying having a single flagship beer owner and head brewer Scott LaFollete likes to listen to everything from Punk to Hip Hop. Never having been a big too exposed to Punk I checked out his three specific suggestions (Minor Threat, The Queers,  and New Bomb Turks) and dug this track the most.

Mitch Dougherty is the man behind Ei8ht Balls brews and is into everything from Patsy Cline, Muddy Water, and Tool to Hank 3 and Pantera. So I had to diversify this list and get some metal in here.

I reached out to Rhinegeist’s Head Brewer Jim Matt for what him and brewer Luke Cole like to listen to. While Jim is all over the map musically and Luke was a Led Zeppelin fan Jim did call out 1 song in particular that I had to include in this list.

On creative days they like 311, others range from Seattle Grunge to Rolling Stones, with a love of classical (Beethoven and Chopin) or Jethro Tull.

Just like our brewing portfolio, all styles get tossed around the brewery!

This idea started with just breweries but since Queen City Fresh is so big into music I decided to include him and expand it to my fellow Cincy Beer bloggers as well.

Chris Stevens may not brew beer, but he’s hugely passionate about music and beer and most especially The Tillers so I couldn’t write this without giving him a shout out. Matt Rowe from MadTree also mentioned The Tillers as a favorite so here’s a track from their new album.

“My favorite band and the most talented musician ever all in one package.”

“Well, except for Prince”

I listen to all kinds of music but right now I cannot get enough of Shakey Graves.

As previously teased one beer has been named the King of the Cincinnati IPA. Last Saturday a plethora of local expert tasters and myself got together to drink a bunch of donated beer, hooray donated beer! The full list of bloggers is:

The blind tasting was proctored by

If you don’t read these guys blogs and/or follow them on twitter I’d highly advise it. They’re all cool and knowledgeable dudes each covering Cincinnati beer in a slightly different way. Also we’re each blogging our thoughts on this whole event and covering everything slightly differently so you should spend a few minutes reading all their posts on the event.

But back to the King of the Cincinnati IPA competition. I’m not sure who’s idea this first was but over the course of ~200 some emails we set a date and a place and got all the local brewers to donate growlers of their IPAs. To ensure fairness Jack & Matt stepped in to randomize the growlers and take care of pouring the samples so we were blind to what beer was in what cup.

The city has some fantastic IPAs some like Mt. Carmel, Cellar Dwellers, and Moerlein are more classic IPAs while Rhinegeist and MadTree produce more over the top hop-focused IPAs that are currently the rage. Rivertown comes in with a session IPA aiming for plenty of flavor with less alcohol so you can drink it over an extended session, hence the name. Blank Slate brings in a very different kind of IPA, as it does for all it’s brews, with what it calls a White IPA. It’s described as a wheat IPA “containing two different wheat malts in addition to oats and honey malt meld with copious amounts of Columbus, Cascade and Nugget hops”.

With all these slightly different IPAs it was hard to pick 1 winner but alas we did, in fact we picked two! Rhinegeist’s Truth and Blank Slate’s Lesser Path tied for first in the initial scoring. We then did a final round with no scoring just a straight up preference pick and while I myself went with Rhinegeist on the basis of it being more a true IPA I was out voted 3 – 2 so Blank Slate’s The Lesser Path took the King of the Cincinnati IPA title.

Since we crowned a king IPA for the Queen city folks may be anxious to give this a taste. If that’s you then the following list should help, but these places may have already sold out so call before you go!

Since our winner is draft only I want to give a special mention to Christian Moerlein’s Northern Liberties which was the highest ranked packaged IPA we tasted. Now I’m also realizing that out of 10 beers we tried only 3, Mt. Carmel, MadTree, and Moerlein are available in non-draft forms.

I want to thank all the breweries for making such great beer and letting us try some, all the bloggers for helping throw this together, and the Brew Professor’s family for putting up with us all for a night! We all had such a great time that it’s agreed we’ll do something like this again. Perhaps another style of beer or perhaps tap rooms or perhaps some other idea we’ve yet to think of!

When I first had Cellar Dweller last year I was not quite amazed. I remember trying 3 or 4 and found them all to be good, not great and certainly not astounding. That changed drastically a few weeks ago at Village Wine Cellar in Lebanon. I had the Doorbell IPA that went through a Hop Rocket right before kegging and man was it amazing (sadly as I found out there has only been one sixth-barrel of that so far). That motivated me to get me off my ass, pay a visit to the Cellar Dweller, and help you all know a bit more about them. 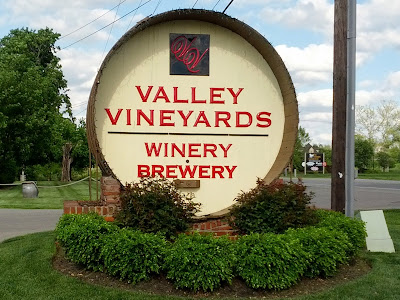 END_OF_DOCUMENT_TOKEN_TO_BE_REPLACED

I spend a lot of time talking about what to drink and not nearly enough on where to go to drink it. This is partly because I’m a lazy shut in and partly because I live in the country. The popular downtown spots to drink are all 45 minutes away from me. Luckily I’ve recently discovered The Village Wine Cellar in downtown Lebanon. 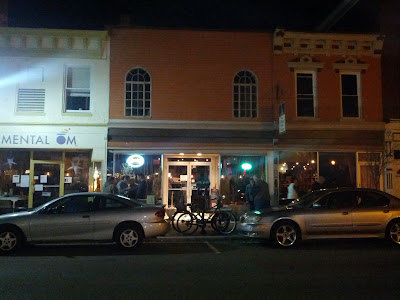 END_OF_DOCUMENT_TOKEN_TO_BE_REPLACED

Below are some details on this weekend’s Oktoberfest celebration at Listermann. This looks like an absolute blast, which I of course will be missing since I’ll be out of town. Hopefully QCD will be represented in some form there, though. Regardless, head over there and celebrate Cincinnati’s up and coming craft beer scene and show them your support!

With every one of the Cincinnati Brewers expanding as fast as they can because we cannot meet demand, we have decided to throw a party to celebrate. We are having a Cincinnati brewers ONLY Oktoberfest on October 6th. Mt. Carmel, Rivertown, Blank Slate, Triple Digit, Christian Moerlein, Rock Bottom, Cellar Dweller, Wiedemann, 50 West and Quaff Bros. will all be pouring beer. It will be more like a Cincinnati Craft beer party, in an Oktoberfest setting. Each brewery is bringing a different beer with Listermann’s providing the Oktoberfest. We will also be having the Bloatarian Brewing League of Cincinnati on hand brewing beer all day. If you want to learn to brew, they will be more than happy to show you.

For special accommodations or questions/comments, please email jason@listermann.com or call 513-731-1130. Thank you!

Event map below (click on it to be able to see the full size map):