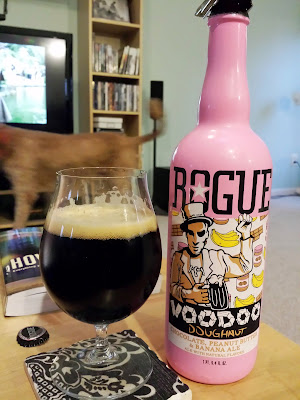 END_OF_DOCUMENT_TOKEN_TO_BE_REPLACED

This week I’m trying two different stouts from a company that mostly makes super hoppy beers and one incredibly rare stout (not one of the two I’m having). For the unfamiliar Three Floyds is a regional brewery in Munster, Indiana which is sadly on the opposite end of Indiana from Cincinnati. Three Floyds (aka 3F aka FFF) mostly produces IPAs and pale ales with lots of extra hops, beers like Zombie Dust, Alpha King, Arctic Panzer Wolf. On the flip side of that is the “legend” of Dark Lord, a Russian imperial stout released 1 day a year in a massive festival known as Dark Lord Day. I say “legend” because Dark Lord is either the greatest stout some people have ever had or an overly sweet soy sauce substitute. Another thing backing that legend is that you can trade it for just about anything online.

Last night I had 3Fs’ Moloko milk stout. Milk stouts (aka sweet stout) are so named because they contain, wait for it… milk! Shocking I know, well actually they contain lactose which is essentially the same thing. So any lactose intolerant folks should avoid milk stouts. What does milk add to a beer? Unfermentable sugars which result in a sweeter taste and creamier bodied brew.

END_OF_DOCUMENT_TOKEN_TO_BE_REPLACED

I’ve been interested in trying this beer for sometime, especially since deciding that this winter was gonna focus on stouts and porters. After digging into the Mt. Carmel Porch Pack again then seeing this was on the Growler Station at the Whole Foods in Mason I decided it was time to try this beer. This is part of their “limited” series that is only available on draft and is supposedly temporary though this has been around for a long time.

END_OF_DOCUMENT_TOKEN_TO_BE_REPLACED

OR (to a lesser degree)

In all seriousness, this is a very, very good beer. In fact, in my opinion, it’s easily the best of their collaboration beers. I was skeptical at first because I’ve never had mint done well in a beer; it’s either overpowering or overpowered. In this case, it hits the mark perfectly, melding with the chocolate and slight roast to create something far more cohesive than would be expected. It’s sweet without being cloying and improves immensely as it warms up; more chocolate, less mint. As a bonus, that 9.6% ABV is virtually undetectable. This is a nice counterpoint in the dessert beer war to Southern Tier’s delicious, yet Diabetes-inducing monsters. Despite my hesitancy on this, Stone et al. has served up a a really great offering. Recommended without any qualifications.

END_OF_DOCUMENT_TOKEN_TO_BE_REPLACED

Continuing the hookup from Oskar Blues I’m trying their Scotch ale, Old Chub, tonight and tomorrow night will bring my review of Dale’s Pale Ale. This is a strong scotch ale, aka a wee heavy, and like all scotch ales feature lots of malt and almost no hops. This is historically due to the fact that hops don’t grow in Scotland and were expensive to import. Enough of that, onto the beer.

END_OF_DOCUMENT_TOKEN_TO_BE_REPLACED

After announcing that Now is the winter of my dark-content a friend of mine gave me this beer saying it is one of the original Porters and is a great starting point as it’s very typical for the style. Before we get to the review I’ll fill folks in on what a Porter is with a bit of history, but that comes after the break!

END_OF_DOCUMENT_TOKEN_TO_BE_REPLACED

Founders has become pretty well known for it’s stouts, especially the breakfast stouts. The Kentucky breakfast stout and Canadian breakfast stout are some of the most well reviewed stouts out there, usually referred to by their initials KBS and CBS. They’re highly sought after and frequently traded. Luckily, when they are available you can usually get some here in the Greater Cincinnati area. Also the Moerlein Lager house will have KBS on tap September 10th!!! Anyway, I’m wasn’t lucky enough to score the Kentucky or Canadian varieties but here comes the review for the plain old Breakfast Stout.