Rick Armon was in Cincinnati this weekend to promote his new book 50 Must-Try Craft Beers of Ohio and I grabbed him for a few minutes to do a live video about the book.

END_OF_DOCUMENT_TOKEN_TO_BE_REPLACED

I got a special invitation to join MadTree in a session ale tasting and hear a special announcement. What follows part 1 of 2, with part 2 coming at a soon but as of yet undetermined time.

END_OF_DOCUMENT_TOKEN_TO_BE_REPLACED

Over the past few weeks, I’ve run a series of posts about the different styles of beer that rise as leaves fall, from a hatred of pumpkin beers to a history of Oktoberfest and an introduction to wet hop beers. I didn’t write the post hating pumpkin beers though I share Brent’s views. I do enjoy a good Oktoberfest beer, and wet hop beers are okay, but only 1 beer gets me really excited for fall. That beer is Great Lakes Nosferatu.

END_OF_DOCUMENT_TOKEN_TO_BE_REPLACED

If you don’t hang out on social media you may have missed the rapid spread of Hopwater. The short is that Hopwater is a hop, and flavor, infused tonic water.

END_OF_DOCUMENT_TOKEN_TO_BE_REPLACED

Yesterday Jackie O’s Pub & Brewery had one of their bottle releases and I finally made the trip over to Athens to check it out. Luckily I was also able to talk to head brewer Brad Clark for a few minutes about the process. First a bit about Jackie O’s. There was originally a small brewpub in Athens named O’Hooley’s that went under and was resurrected as Jackie O’s in 2005. For the past 8 years they’ve been serving the students of OU fantastic draft beers and for the past 5 they’ve been doing these bottle releases 3 to 4 times a year.

Starting last August new cans of their beer started to appear across Ohio. Mystic Mama, Firefly, Chomolungma, and Hop Ryot (just released last week) are all delicious beers and will soon be joined by cans of Razz Wheat. However these beers only represent the tip of the iceberg of awesome that is Jackie O’s beer.

The next level of that iceberg can sometimes be found on draft around Cincinnati but is mainly only available on draft at Jackie O’s brew pub and public house (a restaurant right next to the brew pub). These bottle releases reveal a large chunk of their awesomeness with amazing sours and astounding barrel aging.

END_OF_DOCUMENT_TOKEN_TO_BE_REPLACED

The official grand opening of Rivertown’s tap room occurred yesterday, and I was on the spot for the event. Their location is pretty convenient from the highway. Don’t let the neighborhood fool you; you’re on the right path. Keep an eye out for their sign on the left side of the road and go about halfway down the building and you’ll find plenty of parking. It can be a bit tricky to find but isn’t bad at all.

Once you get there, you are in for a great deal. It’s $5 for a tour, a Rivertown pint glass (see below), and a pint of beer this has changed since Rivertown installed a 3-sink system. Again, all that for just $5. I don’t want to sound like (too much) of a shill for Rivertown, but seriously folks. Most pint glasses run you $5 anyway, a decent beer at a good bar/restaurant will probably be more than $5, and most brewery tours that I’ve been on are free. So it’s a $10 value for half the price.  It’s hard to get a good picture of the pint glass empty but wait a day or two for my review of the Hop Baron and you’ll see it full. 🙂 It’s a great looking glass, though. 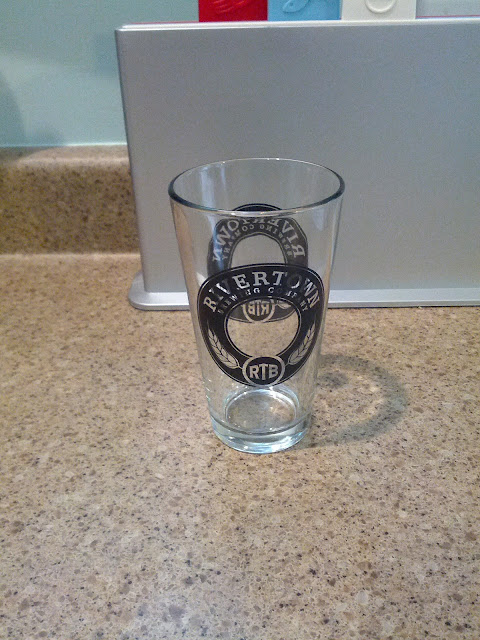 The taproom is a small bar area right in front of the brewery. It’s a very nice bar with a couple of stools, a bench or two scattered around, and another small table off to the side. But you don’t care what it looks like; you’re here because you like beer, good beer, and my next picture will wet your whistle for that! 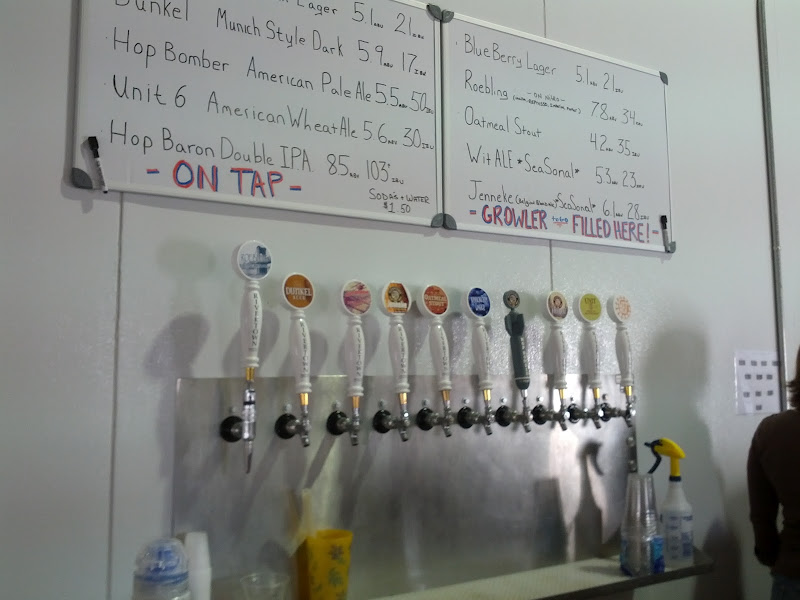 I accidentally cut off the Helles in my picture, but it’s just above the Dunkel on the list. So don’t anyone fret that they didn’t have that on tap! I’m not going to get into an in-depth review of the beers I had there, but the Hop Baron, Helles, and Roebling were all far more delicious than I’ve ever had from a bottle before. The Roebling here is also on a nitro tap (the taller weird looking one all the way to the left) which gives it an amazing smoother (compared to the bottle) taste with a much creamier mouthfeel.

The last thing I’ll leave you with is that they also fill up growlers (which quite a few people were doing Friday night, including myself). The pricing varies for different beers, and I don’t recall them exactly. Suffice to say I have a growler full of Hop Baron in my fridge that I’m psyched to review for everyone’s reading pleasure!