After months of buzz and anticipation Cincinnati was finally able get their hands on Handcrafted Cocktails: The Mixologist’s Guide to Classic Drinks for Morning, Noon & Night

by mixologist and local alcohol-celebrity Molly Wellmann. The book’s Cincinnati launch was held last Thursday at Molly’s bar Japp’s Since 1879 so of course I was there to get my autographed copy and to check out a few of the cocktails that Molly was demonstrating from the book. Here are some of the highlights of the evening.

I haven’t gotten a chance to dig into the book too much yet but it looks great so far. I really like that she divided the chapters into times of day, “Drinks for the Morning” and so on, and then in each chapter categorized them by the main spirit used in the cocktail. The recipes are a mix of classic cocktails with the stories to go along with them, as well as original creations. We tried two of the original recipe cocktails featured in the book, Little Boy Blue and the Sweet Heat.

It was a great night out. Charlie and I really enjoyed the food, drinks, and atmosphere of the event as well as running into other local writers like Sharon Rudd and Anne Mitchell who were checking out the books as well. Of course the dangerous thing about starting to drink in Over the Rhine is that there are so many places to continue drinking once you’ve gotten a few under your belt. We ended up at friend’s birthday party being held at Neon’s once we were done and the next thing you know we are having a drink at Arnold’s with a guy dressed up like Marie Antoinette.

For some reason, as the temperatures rise it seems only natural to switch from darker drinks to lighter. Maybe it is the color or the flavor but this rule applies to beer, wine, and especially to spirits. People associate whiskey with warming you up on a winter evening while white rum and vodka drinks dominate our summer cocktails. But just because the days are getting longer and the pools are opening doesn’t mean you should put your bourbon back on the shelf till fall. Just take a look at this recipe I found on Facebook:

Ok the language may be a little course but it is clear that bourbon can hang with the fruity summer drinks just as well as it’s un-aged cousins. But since the picture is a little vague let me help you out.  Here is a recipe that worked well for me.

4-5 fresh blackberries
1 1/2 ounces bourbon
3/4 ounce ginger liqueur
club soda
fresh basil
Muddle the blackberries at the bottom of a glass.
Fill the glass with ice and add the spirits.
Top with club soda and stir well.
Garnish with a fresh piece of basil.

You can also use plain old ginger ale in place of the club soda if you don’t have any ginger liqueur. You can hear me make this drink and get a review of Elmer T. Lee single barrel bourbon on Episode 15 of Bottoms Up. And if listening isn’t enough for you, this is one of the cocktails that I will be demonstrating at the Summer Cocktails class I am teaching June 20th at Cork n Bottle.  Hope to see you there. 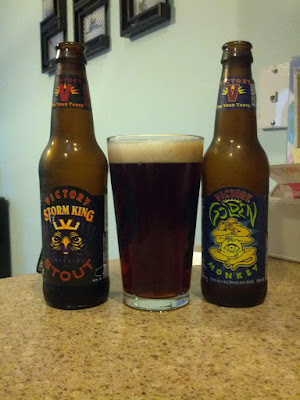 One of the best parts of having a party is the various bottles that get left behind by your guests. I once found a whole bottle of mead in the back of my fridge months after my last party. It was like I’d been visited by the booze fairy. But sometimes the booze fairy is not so generous and she leaves you with a half full case of Bud light. That is not necessarily a problem, my favorite kind of beer is free, but there is a whole world of tasty drinks out there and it seems a shame to waste valuable drinking opportunities working your way through 8 cans of bland beer.

Luckily there is a way for you to turn your liquid bread into actual bread that is quick, cheap, easy, and tasty. Beer bread was a staple in my house growing up and now it is the first thing I make when I know I have guests coming over that I need to impress on the fly. No chili, stew, or soup would be complete without it and best of all it actually works best with cheap beer.

Here is how you do it.

2. Add one and half beers. This works out to 18 ounces of beer which is almost but not quite two full cups of beer. The dough should be very moist but not too runny. The amount of beer you need to achieve this can actually vary depending on the brand of flour, but his ratio seems to work for Kroger’s flour. I think this recipe is best with a full-calorie, light-flavored lager, but you can make it with any beer. Light beer works better than something with a lot of flavor. I’ve made it with Guinness in the past and it really doesn’t taste as good.

3. Pour the dough into a greased bread pan and bake at 375 for about 45 minutes. The outside should be golden and a knife should come out clean when you are done. Melt 3 tablespoons of butter and pour it over the crust and you are ready to go. This bread is best fresh and it is very crumbly. Let it cool down for a little while for easiest cutting.

On this week’s episode of Bottoms Up, Charlie and I reviewed Domaine de Canton, a wonderful ginger liqueur from France. I was first turned onto this liqueur after having a Red Headed Stranger at Bakersfield and was so impressed I decided to go out and purchase a bottle for home. This is a very high quality liqueur that makes a wonderful bottle for both professional and amateur mixologists. It has a very clean flavor, lightly sweet and with a really wonderful ginger bite. What makes this liqueur different from others is that it is cognac based, dating back to the French tradition of making herbed elixirs with eaux de vie or cognac instead of wine or grain alcohol. Although ginger is the dominate flavor, the recipe also includes vanilla and orange blossom honey. Domaine de Canton has been well received by the critics since it was reintroduced with a new recipe in 2007. The liqueur won Double Gold Medal (Best of Show) in the herbal/botanical liqueur category at the 2008 San Francisco World Spirits Competition and Proof66.com designates Domaine de Canton as a “Tier 1” liqueur based on expert reviews. For tasting purposes on the show, I made Charlie a selection of cocktails using the liqueur, including a Dark and Stormier, a Red Headed Stranger, and one of my own creation that I have decided to call the Honey Buzz. It has a more gentle bite than the other two drinks and the combination of honey, ginger, and lemon are a proven winner. Try one for yourself.

Pour all ingredients into an ice-filled shaker, shake well and then pour into cocktail glass.
Garnish with twist of lemon and enjoy!

On the Halloween Special of The Charlie Tonic Hour, Charlie and I shared the fall-themed drink that I made for our Halloween block party. It turned out great and I am thinking of making something similar to give out for Christmas presents this year. If you want to drink along at home here is the recipe for our Apple Pie a la Mode Moonshine. I originally came across this recipe on Allrecipes.com and was delighted to find that my favorite cooking site also has a lot of other cocktail and liqueur recipes to be found there so I highly recommend you check it out.

Bring these ingredients to a boil and then let them simmer for at least 20 minutes. Once the mix is cooled to room temperature or below add:

Everclear or similar 190 proof grain alcohol is not available in Ohio or Kentucky but it is legal in Indiana. The best substitute is a 100 proof vodka. When I was making this that is what I used and I added an extra half cup of each vodka. You can drink right away but it’s best if you let the mixture rest at least 24 hours to allow the flavors to blend together. Pour the drink into pint mason jars for an authentic moonshine look and it would make an amazing gift.

This article originally ran on The Charlie Tonic Hour.