The day has finally arrived. 12/12/12. I’ve talked about the hype behind this beer before but I’ll very quickly say that this has been rated as the best beer in the world and has been one of the hardest to get. Starting today, and likely only today as it will sell out, the monks have changed their rules so instead of only buying it at the abbey you can buy it across America.

I was lucky enough to win a lottery drawing to be able to pay $85 for the 6-pack + 2 glasses. Some are going to the basement for aging, some are being saved for a tasting with friends, but 1… 1 is going down tonight!

END_OF_DOCUMENT_TOKEN_TO_BE_REPLACED

Word hit the net Tuesday about what states and stores would be getting the highly acclaimed and hard to obtain Westvleteren XII (aka Westy 12).  I’ve done the leg work for you and contacted the retailers in the Greater Cincinnati are that’ll be getting this. Before we get there let’s talk about what the heck Westy 12 is.

END_OF_DOCUMENT_TOKEN_TO_BE_REPLACED

It is with great pride and joy that we are announcing the release of the highly sought after Westvleteren XII. There are very strict rules and regulations handed down by the Abbey itself on how and when you can sell as well as buy these beers. Westvleteren XII displays a score of 100 points on both ratebeer and beeradvocate. It is considered by many to be the best beer in the world, as well as the most elusive. Westvleteren was founded in 1838, and has gained national recognition for their beer, which are not brewed for normal commercial demands. The Party Source Beer Department is one of the very few lucky retailers in the US to be able to offer these beers. However, with great reward come rules. In order to be one of the fortunate, you must follow the orders handed down by the monastery. So please check all of the details below on how you can purchase this amazing six-pack that includes two Westvleteren XII glasses. Mark it on your calendar, the Westvleteren XII Gift Set will be sold online for in store pickup ONLY at 12 pm on 12/12/12.

Sales of Westvleteren XII are first come, first serve. There is no waiting list, and The Party Source cannot hold or sell gift sets in advance, take sales by phone or in the store. We also cannot deviate from these limits for anyone. Finally, we regret that we cannot combine orders of Westvleteren XII from multiple customers. Each customer can only order his or her own Westvleteren XII Gift Set.

The Party Source is pleased to announce that the Westvleteren XII Gift Set will go on sale exclusively online (for in-store pickup ONLY, sorry no shipping) on Wednesday, December 12th at 12:00 pm EST.

Newer readers may not know this, but Belgian ales are my love, passion, and absolute favorite style. I’ve reviewed a few Belgians (full list) on this site already, including my review of Trappistes Rochefort 8. I also wrote a long post on the history of Trappist beers which you should check out if you’re unfamiliar with Belgian ales or Trappist beers (which the following beer is one of).

END_OF_DOCUMENT_TOKEN_TO_BE_REPLACED

Normally the trappist brews are Tom’s domain, but I’ve been waiting a long time to try this one and it’s been long worth the wait. I recently came into three bottles of this from its limited distribution on the east coast earlier this summer and have been waiting to kick a terrible case of mono I’ve had for the past month before I opened the first of them.

A little background: Westvleteren 12 (and all the other Brouwerij Westvelteren beers) are very, very highly sought after. They have the smallest output of any of the trappist breweries and Westvleteren 12 consistently places in the top beer lists year after year. Up until this year it has never been distributed legally in the United States, coming to our shores through overseas beer trades, in the luggage of overseas vacationers, and through other various methods. This year, however, to pay for some capital improvements at the monastery, six-packs will be sold with two glasses for $85.00 or so. This may seem like a lot, but the opportunity to purchase six normally next-to-impossible to buy beers off the shelf is one I’m definitely going to jump on (if I even get the chance).

Regardless, I have the beer and I’ve consumed it, so does it live up to the hype?

END_OF_DOCUMENT_TOKEN_TO_BE_REPLACED 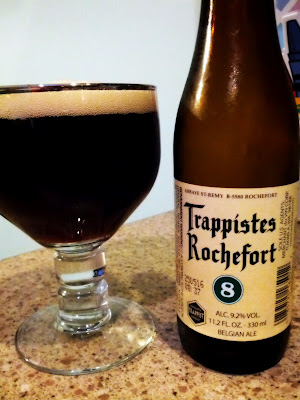 The younger (lower gravity) sibling of one of my absolute favorite beers.

END_OF_DOCUMENT_TOKEN_TO_BE_REPLACED

Westmalle Tripel is the original Tripel and is widely regarded as the best Tripel in the world. Read on to see if I agree